The Davis Dyslexia Correction methods address the root cause of learning disabilities. The student learns how to control disorientation at will. This programme corrects the learning disability by using the natural strengths and talents of the individual’s personal thinking and learning style. It is fun. It is empowering. Many other programmes address only the symptoms and involve a lot of repetition (which dyslexics often find boring and tedious).

The focus of the Davis programme is to help the dyslexic making his/her own pictures for the words that do not have natural images. Therefore, the primary tools of the Davis programme are a dictionary and clay. Using the tools, left and right brain are involved. Left-brain: finding and understand the dictionary definition of a word, and right-brain: use creativity to create/design a 3-D clay model of that definition.

To master riding a horse, one can sit in a lecture room and be taught by the best trainer how to ride  and handle the huge animal, but finally one has to get up and get on and try. Only then will you be able to master horse riding.   To master a new word, or get the meaning of an abstract word, the dyslexic will use his gift of creativity and create the abstract concept in the real world, see and feel what the word looks and sound like.

Elements of the Reading programme 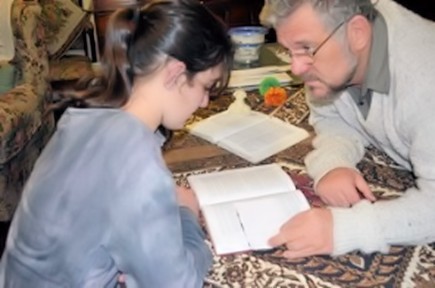 Davis Orientation CounselingTM The client will be facilitated to discover their mental abilities regarding control over their imagination, focusing ability and disorientations and taking responsibility for the process.

Resolving disorientation:  is necessary before the learner can progress, because otherwise they will continue to misperceive letters and words. If one word sometimes looks like bat, and at other times looks like tab or pat or tap or tad – there is no hope that the student will ever be able to recognize the word. A parent or teacher might think that the learner has memory problems and encourage drill and repetition, whereas the learner is confused and frustrated because the tutor seems to be showing him different words each time.

Stress release and Energy setting: The client will be shown techniques to reduce concentration stress, resolving tension headaches, and remaining in a relaxed state. The client will also be given control over experiences of change (time or speed) and control over their energy levels such as hyper- or hypo-activity.

To this in one day:

All triggers in alphabet letters which may cause disorientations are eliminated by creating the letters of the alphabet in clay.

We use clay because it is a three-dimensional medium and also involves a creative, participatory act and a sense of ownership of the alphabet.  This young lady constantly confused the E and the F with each other, making it very confusing for her to read words containing these letters.  It took less than 10 minutes to permanently eliminate the reasons for the confusion. 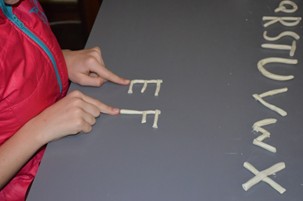 Putting Pictures to the Words: Davis Symbol Mastery®: Word  mastery will be done by sculpting  3-D clay models of the meaning of the abstract words.

Models of “two”, “to”, and “too” are from www.symbolmastery.com

Model of the most frequently used word in Afrikaans : “die”

As picture thinkers, dyslexics are used to look holistically at the word, including word. They find it difficult to sound out letters of a word and most often find it difficult to read the word from left-to-right.  Their struggle to sound out written words leaves them unable to comprehend written material and usually necessitates re-reading the same text numerous times often at the cost of severe headaches. These exercises allow dyslexics a way to quickly, comfortably, and easily learn to visually track, decode, and comprehend written material using their natural abilities.  Read more here. 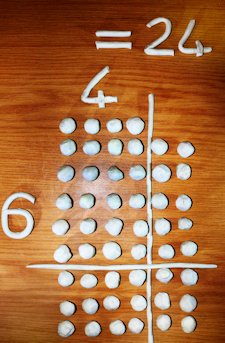 Visual-spatial thinkers are often confused by the words and symbols which describe Math functions. When the foundation concepts for all Mathematics concepts (plus/minus/divide/multiply) as well as a list of about 20 typical Math words in word sums (Add/more/less/each/equal/loss…) are mastered, learning Math becomes easy.  We don’t ask the dyslexic client to learn and remember that 9×9=81, we show him WHY it is 81. That is mastering.

(“From the www.dyslexia.com website Copyright ©DDAI reprinted with permission” ) 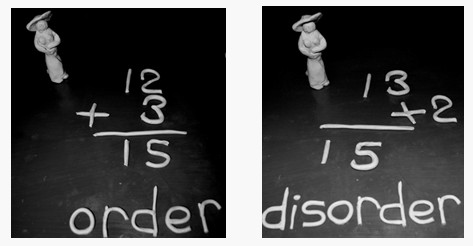 Like with Davis Dyslexia Correction, the first step in Davis Math Mastery is to enable children and adults to control disorientation. Once students can be sure that their perceptions are accurate, they can resolve any confusion about Math with methods that build upon their creative and imaginative strengths.

Have your child ever come home with a report like this one? Does it not leave you as a parent in a state of helplessness and even panic?

For the dyslexic person encountering words whose meanings cannot be pictured will leave the reader with a feeling of confusion.  As he encounters more and more such blank words, confusion intensifies and disorientation is stimulated.  Now the dyslexic uses his imagination to try and limit the distortions, until the confusions are resolved.

In this imaginary world, nothing permanently exists.  He has no sense of cause and effect, before or after, sequence and order.   He might not even have an accurate concept of self and how he fits in the real world.  He may not even recognise that other people have feelings, needs, desires and rights.

It is not only dyslexics that experience ADD symptoms.  Emotions like boredom, curiosity, confusion and fear can also trigger an ADD disorientation.

Also note that ADD does not mean a general lack of attention, it is rather most of time that his attention is focusing somewhere else.  You might recognise that although being told by teachers that your child can’t sit still and never give attention, you often have to use hard words to get him away from a video game.

Ron Davis makes the observation in The Gift of Dyslexia (p. 52) that the problem of ADD has been around ever since teachers have attempted to teach learners subjects that did not interest them.  In most cases it should be described not as a learning disability, but as a teaching disability.  My daughter had a language teacher who believed all die learners in his class are ADD, and they all should be on Ritalin.  The science teacher said he has never encountered any learner with ADD in his class.  Both referred to the same group of learners.   What is the difference?  The one teacher is very dynamic and energetic, involving the learners, using lots of multimedia visual material, demonstrations and enthusiastic tone of voice.  The other teacher has a monotone voice, sits behinds his desk and just read aloud the lessons, not really caring who listen and who not.

Davis Dyslexia Correction procedures can help the ADD / ADHD child (or adult) achieve self-control and overcome problems with focusing, attention and staying on task. The Davis Attention Mastery  programme is added on to the Dyslexia Correction Programme and takes about 8-10 days to complete.

Please take note that clients must disclose to the facilitator all medications prior to a programme being booked; in general, medications prescribed primarily to regulate attention level or behaviour are likely to prevent success with the Davis program.   Please read more on  Why Drugs and Davis Don’t Mix!

Disorientation and distorted perceptions do more than create symptoms of dyslexia. The dyslexic or ADD/ADHD child uses disorientation for entertainment; he may be disoriented for hours on end creating the imaginary world he plays in. The dyslexic child often uses his so-called ADD to escape from the reality of his reading and writing disabilities.   Often, when the causes of such ADD/ADHD actions are eliminated (i.e. dyslexia corrected) then the ADD/ADHD goes away. 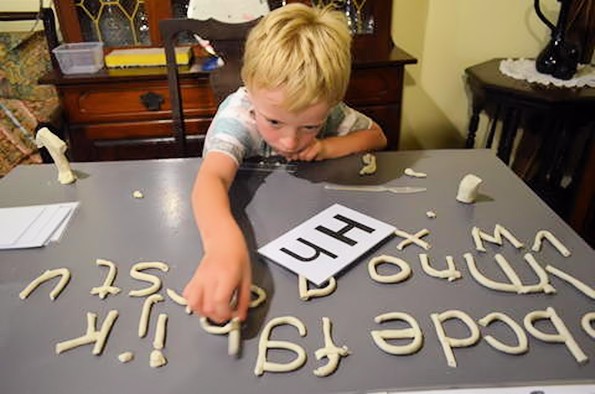 For younger children (ages 5-7) the Davis TM Reading Programme for Young Learners offers the best foundation we have available for very young children, usually already in pre-school and already  encountering  letter and words.  Current research shows more and more that dyslexia is running in families, that is, it is inherited from a close relative, like parent, uncle, aunt, grandparents.  If you have even the vaguest suspicion that your preschool little one may be dyslexic, do not hesitate.  This programme is a powerful, but fun driven individualized learning enhancement programme with a licensed and trained Davis Facilitator, like Jan. During the programme, Jan will work directly with your child, and at the same time provide hands-on training and guidance to a participating parent or other family member.  (For this programme the presence of one or both parents is compulsory.)

The Davis TM Reading Programme for Young Learners provides important tools to beginning readers. Learning techniques and activities are keyed to the developmental level of the child, so the child experiences success in a fun and playful setting. Through active participation in the program, the parent gains the knowledge and tools needed to continue supporting the child’s learning at home.

How is the Davis method different from other approaches?

Clients on Ritalin and similar drugs are required to stop using it (with their doctor’s approval) at least week before starting any of the Davis programmes. It is important for dyslexic students to take control of their own learning, and not being controlled by any such medication . Since dyslexia is not a disease or a psychiatric ailment, medications are not appropriate, and will only hinder the student’s learning abilities.

We hope by reaching this point in your research to find  answers to your child’s dyslexic dilemma, you have realised that the Davis Dyslexia Correction® Programme is a unique approach geared to the creative thinking strengths of persons with dyslexia.  Do not deny your child the opportunity to become a very capable and enthusiastic reader. Contact Jan now and let’s start developing the

Mastery vs Teaching.  The teaching method is that of mastery: Mastery is not reached by rote learning. When someone masters something, it becomes a part of the experience of that person. It becomes part of the individual’s thought and creative process. Mastery is that level of learning where conscious thought is no longer required, there is no need to worry about being able to remember it- what has been mastered, is probably impossible to forget.

The programmes are designed for the specific learning style of the visual-spatial person. The programmes are intense, but also very creative and fun-filled and uplifting, restoring self-esteem and opening new pathways of thought and learning for the dyslexic.

The first step in determining whether you or your child are experiencing learning difficulties due to dyslexia, is to do this preliminary free and confidential screening assessment in order to get a profile of learning strengths and weaknesses, including a measure of severity of symptoms.

Your answers to the 41 questions are confidential and stay with you. Your results will be shown on screen as soon as you finish answering the questions. You will have an opportunity to print out your results at the end of the assessment.

The second step is a basic interview by phone/skype where you can ask as many question as needed. Contact:

Phone : +27 83 413 1428 or Email: info@dyslexiasolutions.co.za After this initial exercise the formal process will start.